Eminent Presence in 120+ Countries: SOLIS Taking The World By Storm

Eminent Presence in 130+ Countries: SOLIS taking the world by storm!

Celebrating the legacy of 10,00,000 customers: a symbol of our quality and excellence

Eminent Presence in 130+ Countries: SOLIS taking the world by storm! 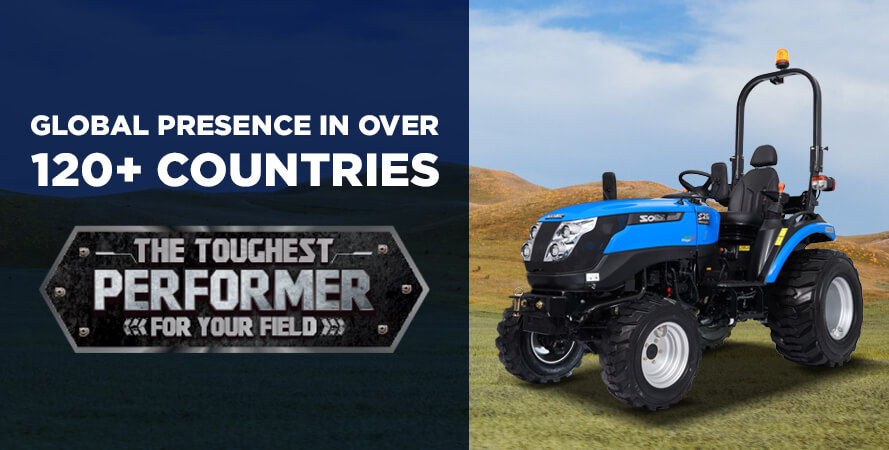 Since its inception in 1969, SOLIS has crossed several milestones, with its success coming across as a coming of age story. With the Green Revolution taking place, agricultural production was increasing worldwide and SOLIS seized the opportunity to start as a farm equipment manufacturing company. With the collective efforts of the employees, SOLIS assembled their first tractor in 1995. The following year, they opened a manufacturing plant in Hoshiarpur, Punjab which is now the world’s largest tractor manufacturing plant with a production capacity of 300,000 tractors. In 2000, SOLIS entered into joint ventures with worldwide pioneers like Renault Agriculture, France and Class Tractors, Germany. This helped them enter new markets and reach out to new customers. From that point, there was no looking back for the brand.

Steadily marching towards the path of prestige, they achieved in-house tractor engine manufacturing capacity in 2001. Post their collaboration with YANMAR,SOLIS expanded to the Japanese markets as well and they launched their first compact tractor in 2005. Between 2005 and 2011, SOLIS launched a diverse range of multi-utility tractors to suit the needs of its customers. 2014 was a remarkable year for SOLISfor it achieved a new milestone and became India’s 3rd largest tractor manufacturing company. By 2017, SOLIS had an export reach of 80,000 tractors and over 700,000 customers globally. A path breaking moment for SOLIS, the company sold 1 lakh tractors in a single FY 2018-19.

Coming forward to the present, SOLIS,in the current day, has a global name with its presence in over 130+ countries, giving a close competition to other leading companies in the automotive industry. Committed to providing a complete agrarian solution to all your farming needs, SOLIS is redefining the future of agricultural machinery, providing a broad range of products including tractors, engines, auto components, diesel gensets, etc. Their tractors come in 3 ranges- S series, which are compact, N series for narrow tracks and H series with hydrostatic transmission. All these tractors are highly durable and economical, which makes it a perfect choice for different farming activities. SOLIS curates tailor-made products for different countries, based on their agricultural practices,catering to country-specific requirements when designing the products. This has been made possible by the consistent efforts of a competent workforce of 5,500+ dedicated employees, with 400+ engineers bringing about new ideas and thus enriching the R&D.

SOLIS has now made its grand entry into the markets of Guadeloupe Islands, which is a great destination for agro-tourism. This move boosted the agricultural activity in the island, as SOLIS delivers its world-class equipment for increased agricultural production. SOLIS has also entered the southern Caribbean nation of Saint Vincent and the Grenadines, which is primarily an agrarian economy with over 10% of GDP coming from agriculture. Providing customized tractors for agricultural diversification and efficient farming, SOLIS is making its mark in the Caribbean market.

All of this has been made possible by the consistent and collective efforts of the people at SOLIS, who make sure that they keep coming up with new and practical solutions to solve problems faced in the agricultural sector. SOLIS has been attending world famous exhibitions, reaching out to investors, new target groups and displaying the best of their products. It would be safe to say that the road to success is never ending and SOLIS has just begun!

Stay Ahead With the Unmatched Potential of SOLIS Compact Tractors

Solis Utility Tractors – Perfect for Every Job Around Your Farm

Buy Compact Tractor that Fits All Your Needs